The great physicist Newton told us that quite contrary to our everyday experience there is no such thing as a 'heavy' mass. An apple falls because it is attracted by earth. So where today's solar fusion theory assumes the biggest forces - at the center of a celestial body - they are in reality zero. Gravitational forces at the center of a celestial body simply cancel out. This may seem paradox at first glance but  is basic vector math (see end of this page**). Gravitational forces decay to zero when you approach the center.

On Dec 13,2010 NASA reported: “The whole solar hemisphere erupted simultaneously in an avalanche effect that had been triggered in the tiny solar core and propagated outwards”. This brings more and more solar experts to agree that the sun has a solid core (Why this takes so long till it is fully accepted is the fact that  this invalidates today's astronomy (and astrophysics) in whole - except f.i.  wobbling stars. In a nutshell, today's astronomy classifies stars according to the Hertzsprung–Russell diagram. While this is in the first place only a luminosity/spectral type diagram, it is interpreted according to today's stellar astrophysics (fusion-theory) as a direct indication of the masses of the stars. This connection was introduced  in 1926 by Arthur Eddington in his book 'The Internal Constitution of the Stars', initiating thereby today's astrophysics. Wikipedia:"In the process of developing his stellar models, he sought to overturn current thinking about the sources of stellar energy. Jeans and others defended the Kelvin–Helmholtz mechanism, which was based on classical mechanics, while Eddington speculated broadly about the qualitative and quantitative consequences of possible proton-electron annihilation and nuclear fusion processes."  But also supernovae etc. are constructs and interpretations of the fusion theory.  Read more here and here.). It seems this was the event and the reason that solar researchers started in 2011 for the first time to take into account that: "the sun might not be symmetric on the inside". If you can't believe it, you should read the whole thread.

Then there is the fact that the surface of the sun has a much lower average temperature than the corona, 5800 kelvin compared to the corona's temperature of one to three million kelvin. There is absolutely no lucid explanation how a fusion reactor at the center of the sun should heat the corona through a rather cold solar surface. Which now also other scientists see as 'mystery' which needs explanation. See also here and here. See also "The Sun as an X-ray Source". The search experiments for the missing solar neutrinos  has reached the third generation. Popular explanation. But also other evidence challenges the assumption that H-fusion is the main source of energy that powers the Sun .

And "Despite more than 50 years of effort, today’s nuclearfusion reactors still require more power to run than they can produce". And compare this Sun spot record over last 60 years with the oscillogram that the here downloadable program computes (this program is no more downloadable, because it was a dos-program and  you would need special graphics  driver programs which today no more exist). You will be surprised... More here or under links.

Now if there are additional surface forces added  - as for example in the case of the central body of a planetary system - we have a shining star. These forces additionally melt the thin outer crust. How we name the effect in the end is a matter of semantics, not physics. This is the whole 'mystery' of stars and  therefor our sun.

Already in 2015 the mainstream astrophysics theory tried to build a bridge to a complete new understanding:  "Effects associated with rotation can modify stellar properties, altering the luminosities, surface temperatures, sizes, and shapes of stars in ways that are unaccounted for in nonrotating models." There should be no doubt that already this statement invalidates all actual textbooks on astronomy and astrophysics.

As is known since long the sun rotates very much faster at its equator than at the poles, another fact for which today's solar fusion energy theory is not able to give a plausible explanation. The here downloadable program calculates the thus produced energy (in a preliminary calculation - if we understand the process fully, much better calculations will be possible) to 1.2 x 1022Ws to 2.0 x 1023Ws. The difference to the here on earth measurable 2.6 x 1026Ws to 1 x 1027Ws  is due to plasma processes and other not regarded sources of heat  in this preliminary calculation.  Any theory which is not able to give a satisfying explanation for this differential rotation is bound to fail in the end.

Friction in the shear-layer produces heat (the measured 5800 Kelvin on the surface of the sun) which in turn produces convectional plasma flow in turbulent warps and waves. This turbulent action and induction  produce in the plasma layer electric currents and magnetic fields which are responsible for the flares and coronal mass ejections of magnetized plasma gas. The flares heat the corona through resistive heating. This functions very similar to the toaster you use in the morning to toast your bread. The mass ejections are short circuits when two inversely polarized flares attract each other and finally  collide.

Rotation period on the surface of the Sun 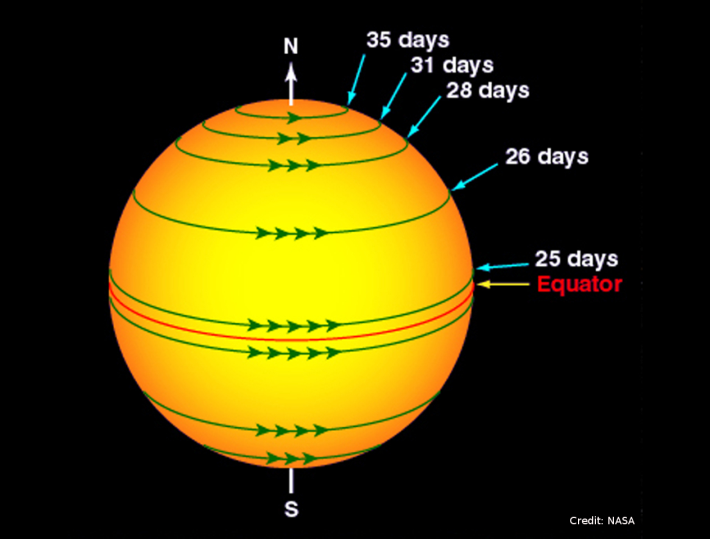 "The Sun is a ball of plasma and gas, and does not rotate like a rigid body. Its outer layers rotate differentially with equatorial regions being faster than the polar regions" (image:NASA) 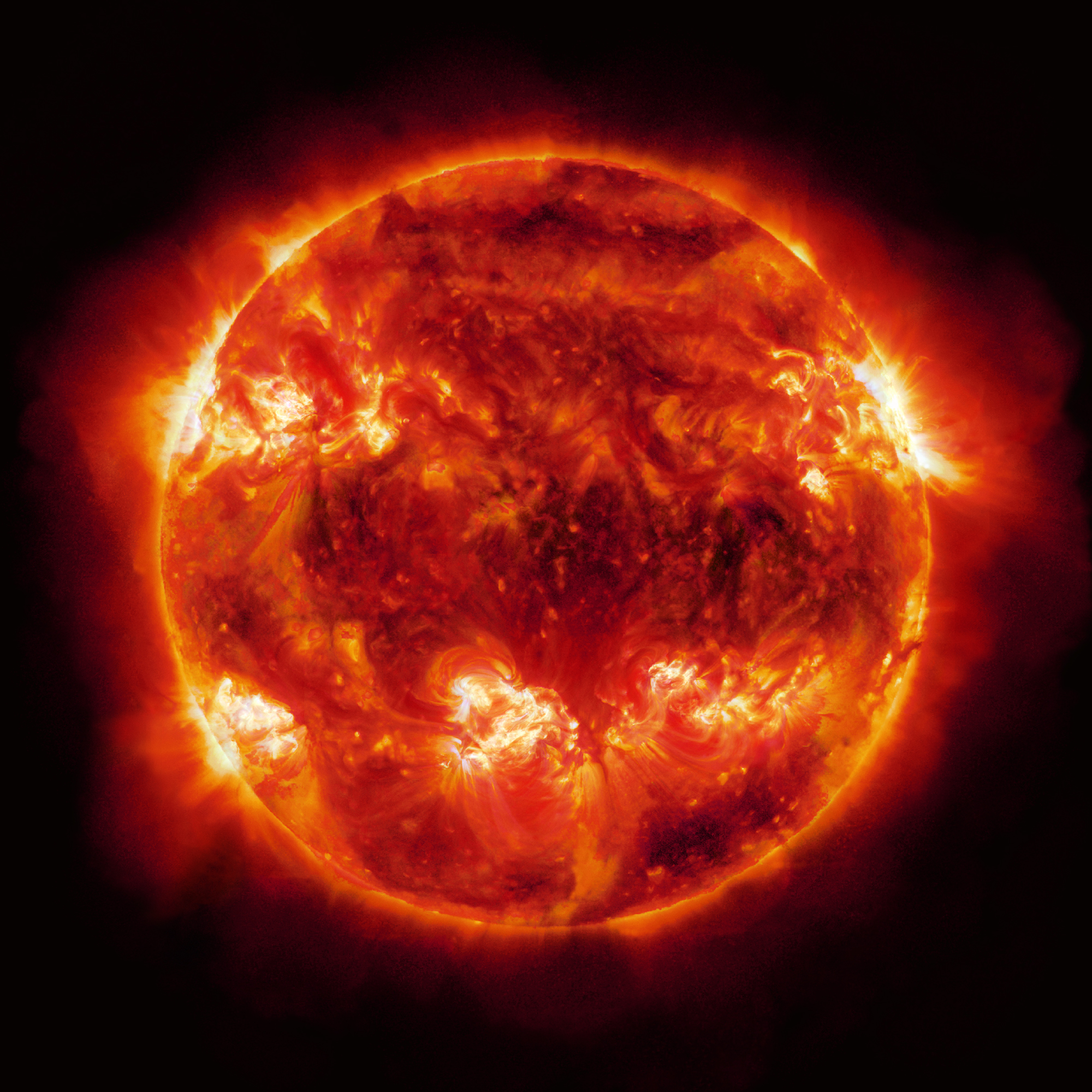 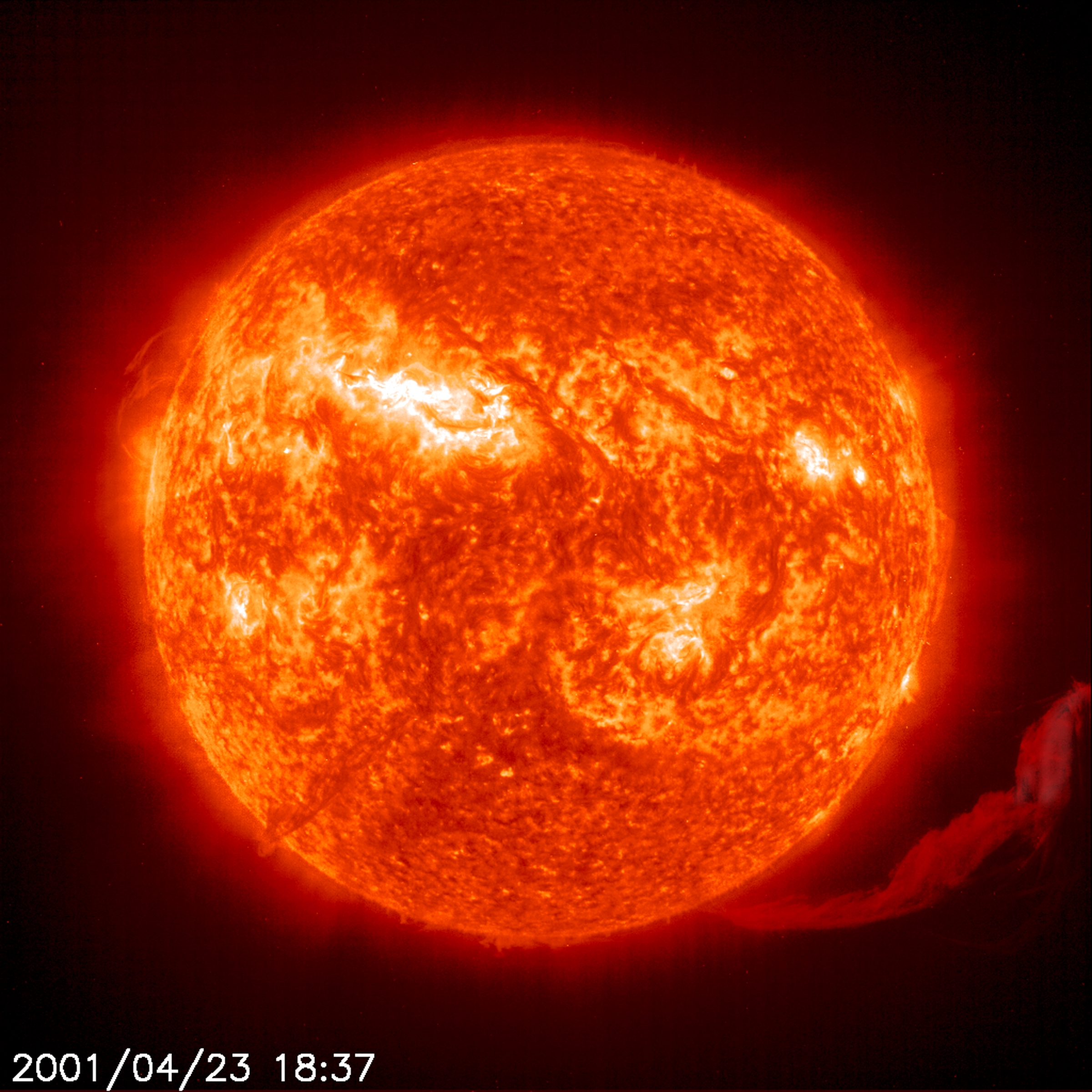 Credit: The satellite Solar and Heliospheric observatory an international project of ESA and NASA 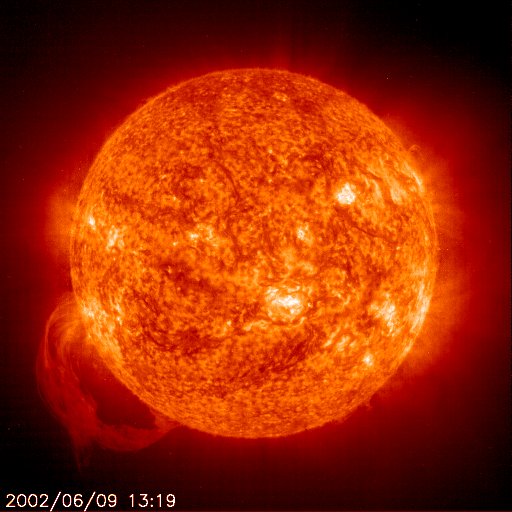 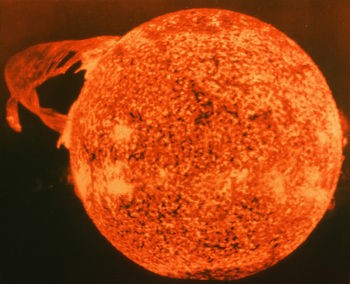 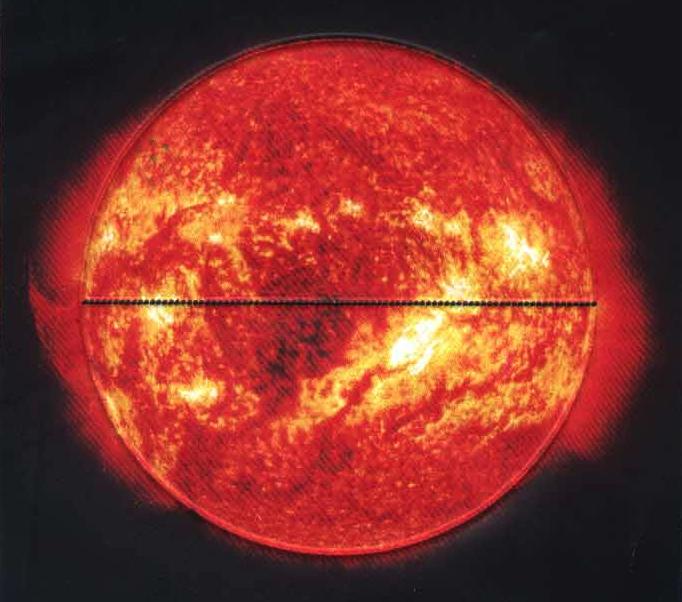 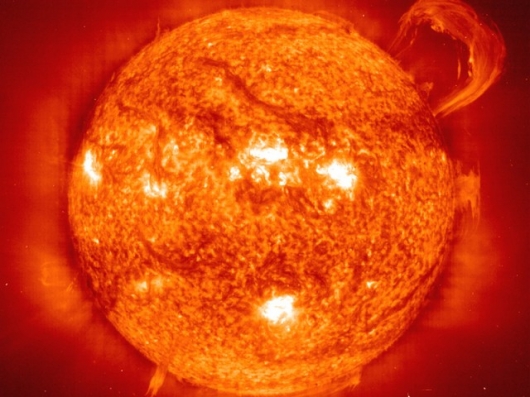 Rotate a glass of water in the below shown manner (as a Gedanken-Experiment, admitted not feasable by hand)  - you will get a rotation of the water as you see in the pictures above (expressed a little bit more scientifically 'spin-orbit-coupling'). And although this movement is really small and slow - this is the reason why it has been detected so late - it has, considered the enormous mass of the sun, enormous consequences as you can see in the photos above.  And you don't need a degree in physics to understand that flares occure exactly there where you would expect them to occure (in the high resolution pictures above you can see them also on the surface of the sun). For more indepth simulations see here.

The NY-Times: The Wobbling Sun

other links if you want to read more on the subject:

http://cass246.ucsd.edu/~ppadoan/new_website/PHYSICS_1A/Lecture21.pdf ( no more accessible to the public? )

In case there are other copyrights involved please tell me!

** Symmetry conditions at the center of a celestial body dictate the cancelation of the forces. A very much simplified mechanical 2-d model of a celestial body would consist of a ring and many springs symmetrically attached to that ring which are connected to each other at the other end. If all springs are of equal strength this connection point is located at the center of the ring. Now if you pull this center connection of the springs to any point inside the ring you get a rough impression of the forces at that point. (Outside the ring things get much more complicated and this simple model is no more applicable.) As you can clearly see the forces at the center cancel out and are very moderate in the vicinity of  the center. You may even move this center point nearly halve way to the outer ring without exertion of too big forces. This is also in conformance with all newer measurements to the inner structure of the earth and  here and here and here and here. And the moon as well. And also what all newer helioseismic measurements say (also here or here, popular article). "Solar experts (..) say the sun has an iron core". (Which leads to such remarkable statements as this one: "The innermost layer of the sun is the core. With a density of 160 g/cm^3, 10 times that of lead, the core might be expected to be solid. However, the core's temperature of 15 million kelvins (27 million degrees Fahrenheit) keeps it in a gaseous state." Original quotation from http://fusedweb.ppl.gov/CPEP/Chart_Pages/5.Plasmas/SunLayers.html where your browser will tell you that this governemental site is not trustworthy ??. After this site linked to that page the  address changed to: https://fusedweb.llnl.gov/CPEP/Chart_Pages/5.Plasmas/SunLayers.html Should this quotation disapear once again, search for "sun density 160 g/cm^3"  You will find many university servers with a similar statement.) Formerly it was assumed that the matter at the center of the earth is fluid - 'heavy' masses should exert biggest 'pressure' thereby liquefying the matter. It has even been "mooted in the past (..)  that a natural nuclear reactor exists deep within the Earth...the possibility of such an underground reactor" (...cannot be ruled out) "but" (..data from KamLAND and Borexino) "place upper limits on how much heat could be produced by the reactor deep, if it exists". ( This arcticle is from July,2011!) The gas giants (Jupiter, Saturn..) are since long supposed to pocess a solid core.  A condensed historical overview of the way to today's solar fusion theory you can read here. And last but not least this is also the reason for the perfect round shape  of celestial bodies (centrifugal forces from rotation and gravitational irregularities neglected).

It should be noted that this model is really very much simplified and is only thought to demonstrate the cancelation of the forces. It has some severe deficiences in other aspects. This model serves the purpose to demonstrate that

300 years after Newton it is high time to put finally an end to this medieval thinking.

How today's physics sees the nuclear energy production in the sun (see: http://www.nobelprize.org/nobel_prizes/physics/articles/fusion/index.html ) :

If you want to read more on nuclear fusion (articles to the real theoretical problems are not freely accessible in the net):

If you want to experience the actually changing view in science you should compare these two descriptions http://fusedweb.pppl.gov/CPEP/Chart_Pages/5.Plasmas/SunLayers.html (new view, so it seems it is only a matter of time...) and wikipedia\Nuclear fusion - Wikipedia, the free encyclopedia.html(old view, the 2 pages are local copies of Sep 12, 2011 since wikipedia is ever changing) or this description: http://www.nobelprize.org/nobel_prizes/physics/articles/fusion/index.html

Neutrino problem - despite contrary assertions it is not solved: http://www.tim-thompson.com/fusion.html and http://crio.mib.infn.it/wigmi/pages/cuore.php and http://arxiv.org/pdf/1104.1639

Read : Why Einstein was wrong here.

(should any link on this page be non functional: please tell me. I'll upload local copies in this case.)